Hiring and Interviewing Management and Leadership

This is Part 1 of a multi-part series covering some of the topics introduced in our RailsConf 2018 Interviewer Skills workshop.

How would you describe what kind of person would be an ideal candidate to hire? Beyond experience in a tech stack, what attributes might they exhibit that would make them a good addition to your team? How would someone else know who to recommend to join your team, or whether they themselves might be the perfect addition to your team?

These are some common answers I’ve seen:

These sound pretty good until we stop and ask ourselves what they really mean. What makes someone “smart”? How fast is “learns fast”? What happens when you think “smart” means one thing, your candidate thinks “smart” means something else, and you hire them because you both think they’re “smart”? We talked a little about this at the RailsConf 2018 workshop on Interviewer Skills. Neither you nor your candidate are wrong about your definitions of “smart” – but it’s important for you to have compatible views to be able to work together effectively.

One way to tell how well you know what you’re looking for is to describe that attribute in a few words. In five words, what are some ways it means to be “smart”, to be “independent”, to be “not a jerk”? 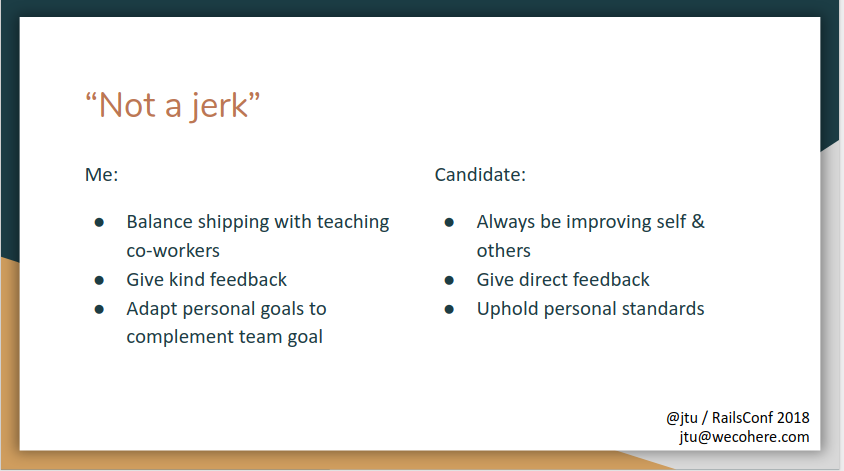 Since we went pretty in depth on what it means to be “not a jerk” at the RailsConf workshop (see above slide for some very reasonable but incompatible interpretations), let’s pick a different answer to dig into for this article: “independent, gets things done”.

Being independent could be many different, and possibly contrary, behaviors. Is a candidate independent if they

Different people can come up with different implications for what it means for someone to be “independent” or “get things done”. None of these beliefs or behaviors are wrong or bad. But if you mean one thing by “independent” and your candidate means something different by “independent”, after your candidate starts on the job you’ll both feel like the other party isn’t meeting expectations (and maybe feel they kinda misled you in the hiring process).

You: Hey, it’s been several weeks and you seem to still be asking your colleagues a lot of questions.

Them: Yes, I ask questions because we talked about how this team values independence.

You: That’s… that’s not independence.

Them: What kinda bizarro company is this where that’s not a mark of independence??

That’s a lot of unnecessary hurt feelings and lost time that could have been prevented with a little more preparation by you, the hiring and interviewing party.

What can you do to prevent this?

Know your goals: be able to describe the candidate attributes you’re looking for, in about five words per attribute.

One tool that can help you do this is to write down some of the ways you appreciate seeing people on your team be “independent”.

From here, you’ll be able to find your attribute description. You can look for a unifying theme, or shared characteristics. Maybe it’s “collaborates with a strong sense of solo ownership”. Maybe it’s “seeks input that can drive decisions without external input”.

Once you’re done digging into one of the candidate attributes you’re looking for, don’t stop there! Repeat this process for 3-5 other attributes besides “independent” that you value in your teammates. When you’re done, take a look at the 4-6 attributes you’ve described. These are your hiring goals. This is what will indicate to you if a candidate should be hired or rejected. Make sure everyone on the team is aligned on these goals. Regardless of your hiring practice – whether you have a full day on-site, or share a coffee and a handshake – knowing your hiring attributes as a team is the key to successfully hiring your future teammate.

We’re back from speaking at RailsConf, and what an incredible experience! The conference organizers did a fantastic job at running a smooth event despite nev...

_This is [Part 2 of a multi-part series](/topics/interviewer-skills-workshop) covering some of the topics introduced in our RailsConf 2018_ Interviewer Skill...

Earlier this year, I watched as people involved in the software world called on major organizations to change. These organizations included the MIT Media Lab, MIT itself, and the Free Software Foundation. While details and content of these dem...

We know the hiring market is tough right now. Compensation expectations, job mobility, recruiting costs, and opportunity costs for unfilled positions are all high. How do you attract the talent you need to your company when you’re not [a household...

Porcini Hunting - Finding Your Programming Guide is a three-page micro-zine that draws a parallel between hunting for mushrooms and finding technical mentors and teachers. While this started as a test-draft for printing full-col...